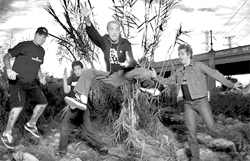 Back in the mid 90’s, the illustrious Darrin Pheiffer of Goldfinger relocated from his beloved Canada to the balmy shores of southern California. While working at Starbucks in L.A., assistant manager status eluded him when he met guitarist John Feldmann. At first, Feldmann hated him. Irritated by Pheiffer’s nonchalant braggadocio concerning his percussive prowess, he dared him into an audition.

Pheiffer, influenced by hardcore (as well as reggae) based acts such as The Clash and The Police, is now recognized as one of the fastest, hardest hitting drummers to ever emerge out of California’s punk/ska scene.

The band gelled, and their self titled debut garnered airplay with hits “Here in Your Bedroom,” and “Mabel.” Not resting on their laurels, the boys became one of the hardest touring acts around, teaming up with bands such as No Doubt to packed houses. A hard core fan base was built, yet another hit never surfaced.

Goldfinger has enjoyed the status of a successful band with respectable sales and a die hard following, but many wondered why the airwaves were basically ignoring material that was as radio friendly as the music of their peers. “We left it up to the label, and quite frankly, they fucked up” said Pheiffer. “They would be all excited about a song like “Tell Me,” and wind up not pushing it. They would ignore the songs that we were sure would get more play.”

A hiatus after their album “Open Your Eyes,” had Feldmann working behind the scenes bringing bands such as The Used and Good Charlotte into the limelight. The band was left with no contract, but the determination to continue on and the addition of guitarist Brian Arthur (replacing the much loved Charlie) kept the vision alive.

Their new record “Disconnection Notice,” has been released on Warner subsidiary Maverick. “We’re happy to finally be a part of a good team,” stated Phieffer, “they care about music.”

The disc is a solid mix of metal meeting reggae with the tight pop-edge the band has become famous for. Pheiffer notes a more collaborative effort than in past recordings. “Usually, we would head into the studio and John would have everything pretty much done. This time, everyone had a lot of input in the recording.” Feldman’s studio expertise is well established in the industry. It is almost hard to imagine him stepping it up a notch, but “Disconnection Notice,” is testament to his genius with the kind of production level that only happens in about one out of every thousand records.

Gorgeous guitar envelopes huge drum sounds, and while slick could be used as a defining word, the homogenization that invades many recordings of the genre is not apparent. Opening track “My Everything,” pounds with the precision of a jack hammer at a break neck pace, while pop gems such as “Wasted,” and “Walk Away,” scream for radio play.

Heavy reggae stylings are found on tracks like “Uncomfortable” with lush horns and captivating melodies. Precious nuggets like the hard driving “I Want” will be sure to please those interested in their heavier side showing catchy hooks matched up with ball busting tempo.

The eclectic mix that has endeared thousands to the band still remains, and is apparent on their newest album. Few bands can run the gambit of sound and style while still maintaining the kind of continuity that is found on a Goldfinger record.

If you haven’t seen them live then you haven’t lived. A Golfinger show is a spectacle of high energy rock that will leave you sweat soaked, bludgeoned and satisfied. Be sure to catch them on tour when they hit The Rave in Milwaukee on March 4th or in Minneapolis (well worth the drive) on the 5th. Final note: I was compelled to ask Darrin why he had such a compulsion for exposing his well shaped ass at shows…he just giggled.