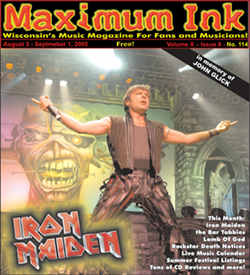 Simply put, Iron Maiden had to co-headline OZZfest 2005. From the band’s perspective, spending the summer on OZZfest would expose the legendary Maiden machine to a vast new, younger audience. And from OZZfest’s perspective, Iron Maiden were the only remaining band left to headline the summer caravan. It was the best of both worlds for both parties, and creates an even better world for fans of heavy metal, as the double-billing of Black Sabbath and Iron Maiden creates one of the most potent top-heavy package tours in music history. Ironically, while neither band are boasting new material, there are three solo albums being released this summer from their cumulative forces, two from Sabbath guitarist Tony Iommi and bassist Geezer Butler, and one from Iron Maiden frontman Bruce Dickinson. We won’t be hearing any of the new material this summer, and there’s only a possibility that any of them will tour solo this fall, which makes their presence on the road this summer even more monumental. Especially in the case of Iron Maiden. While Black Sabbath tours have become an annual occurrence as of late, there’s no telling what the future holds for Maiden, especially in America. Their last album, Dance Of Death, was a chart success for the band, but it resulted in only two domestic tour stops in New York and Los Angeles. And with frontman Bruce Dickinson being a full-time airline pilot outside of Iron Maiden, we have to approach any opportunity he takes to tour as privileged circumstances…

MAX INK: In past discussions, you’ve expressed a strong distaste for “greatest hits” tours. Yet now you’re doing another one on OZZfest. Why do you have such an issue with them?
BRUCE DICKINSON: Greatest hits tours are very seductive things, but what annoys me is, when we do the hits tour in Europe, it’s got a different perception. When you do the hits tour here, the audience is smug, and there’s a sense of self-satisfaction, like, “We got what wanted…” In Europe, there’s a sense of celebration, an ecstasy that goes with it. If I’m looking at an audience that is self-satisfied and happy and fat, and getting what it wants and isn’t prepared to get off its ass, what am I? A cabaret? Am I a dancing bear that just performs in little circles and they clap? I can not exist for longer than about five minutes like that. Every now and again I don’t have any objections to it, but if it becomes a regular thing, that’s not why I got involved. I got involved to become a creative artist. I know human nature, and I accept that people like to hear songs that they know, but not withstanding all that, seeing people who are apparently spiritually dead, applauding not because you did a great version of a song, but only because they’re familiar with it, is soul destroying. For all of us in Maiden, we put so much into the performance… We’re actually better, and more effective now, physically, than we were when we were 25. When we were 25, we were young, dumb and stupid, drunk all the time and hung over. We appreciate what we can and can’t do now, and we feel like we owe it to ourselves to give people 100% of our heart and soul. When it’s the audiences that are apparently just there for the ride, for a while it’s disappointment, then it just turns to anger. Why are we doing this to ourselves, when the people apparently don’t care? They want to see some pastiche shit, and they don’t seem to understand that this is our life!

MI: That’s America, though. This country doesn’t want to a challenge, they want to be spoon-fed.
BD: I understand that’s America, but we don’t have to tolerate it. It’s not a question of being childish and trying to punish them, but if people don’t understand what we really do, why do we beat ourselves up coming here to do it, only to torture ourselves? Because you need the money? We are permanently astonished, in the band, by the different reactions throughout the country, and we can’t make any sense of the whole pervasive influence of corporate U.S.A. When you can talk to kids, one on one, it’s a completely different vibe than when you get 6,000 of them together. I don’t know how we’re going to approach America in the future…

Mi: Does it bother you that people are so driven by the hits, that they don’t give new material a fair shot?
BD: We’re very philosophical about it, because we’re very aware… Going back to the earliest days of Iron Maiden, our first label said we’d never happen in the States, because we were too aggressive, and too out of left field. This was even before I was in the band. Then, when we had “Number Of The Beast,” and people thought we’d convert to Twisted Sister and be a flavor of the month. In reality, though, we have more in common with the Grateful Dead. That’s more of who we are. A Grateful Dead, now, would be impossible in the United States. The closest you’ll get is Pearl Jam, or maybe Neal Young. We’re going to do what we do, which is what we have done. Europe, South America, they’ve embraced Maiden, and to a certain extent, it’s unbelievable how the fifteen, sixteen-year-old kids continue to embrace us there. Where in America we headline a 6,000-seat stadium, in Europe we’ll headline a 50,000-seat stadium. For example, French Canada is such an amazing market for us, we deliberately go back there and return the favor. But if people think they just want to see a rock version of David Letterman, why should we go there? The money is irrelevant. We can make more money with a two month hits tour in America, than we can touring Japan and Europe. Yes, it’s about making a living, but it’s about making a living with dignity. Do we really need to go down on bended knee to people that don’t care that much about the band? I hate Walmart, and I hate the corporatization of everything in America. I despise it. People need to have their minds made up for them, at this moment, and they need to liberate themselves from that. It drives me nuts… And it’s not just America.

Mi: How do you approach OZZfest, when it’s not particularly an Iron Maiden crowd you’ll be playing for?
BD: Actually, I would much rather headline OZZfest than do our own tour, because that crowd is who I care about. To me, I care about performing for kids a lot more than being in front of 40-year-old wanna-bes. I don’t care about nostalgia, and it’s not on my radar. Give me a couple of days notice, and I can do nostalgia any day of the week.