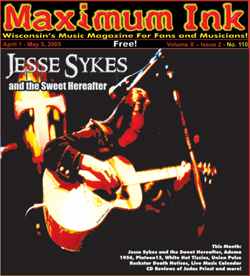 Ever since two cavemen started beating sticks on hollow logs it has apparently been the goal of musicians to be louder. Symphony orchestras, Celtic, Polka, bluegrass, country, rock and roll and sometimes-even jazz, strive to amp up the volume. Now I love nothing better than to have my eardrums blown out by great live music, but not long ago I found myself on a road, miles from any sign of human inhabitation. I stopped my car and stepped outside. The quietness was deafening. A rushing white noise, phase shifted through my ears, like the beginning of some bad rock song from the 1970’s, but after a few minutes I started picking out the chirping of birds and insects. A minute later I could hear the leaves of trees rustling in the slight breeze. I was amazed at the complex audio beauty of a seemingly silence place. The same thing happened to me the first time I saw Jesse Sykes and the Sweet Hereafter. There are few bands in the world as quiet as Jesse Sykes and the Sweet Hereafter. You can literally hear a beer glass fall on the floor while they are performing.

Fresh off a twenty-day tour of 2,000 seat theaters opening for Bright Eyes, Jesse Sykes and the Sweet Hereafter is hitting the road again. Their latest CD, “Oh My Girl” on Barsuk Records has been selling steadily and has landed on the Best of 2004 lists by such notable publications as the New York Times, The L.A. Weekly, Harp and Maximum Ink.  The band isn’t resting on its laurels.  “When you get home from a tour,” said Jesse, “it’s like, what do I do?”

Without trying to sound like a hillbilly gothic tale, The Sweet Hereafter was formed in 1998, when Jesse Sykes was stirring the ashes of her band Hominy, met and fell in love with Phil Wandscher, the former guitarist of Whiskeytown. Not long afterwards, former violinist for The Walkabouts, Anne Marie Ruljancich signed on and drummer Kevin Warner and bassist Bill Herzog (who also plays drums for Joel Phelps and the Downer Trio) followed shortly after. Signing with Barsuk Records, then home to Death Cab For Cutie, they release the critically acclaimed “Reckless Burning” in 2002. “The whole thing about being a musician,” explained Sykes, “is that you are only as good as your last record.”

Keeping busy with tours across America and Europe, Jesse Sykes and the Sweet Hereafter have come across some audiences that weren’t accustom to Wandscher’s slow motion guitar licks, Jesse’s tortured vocals and a drummer who uses brushes. “I don’t give a shit what anyone thinks,” said Sykes. “You know in your heart what you resonate to and that’s what you want to chase.”

A dozen tours of Europe with The Walkabouts have turned violinist Anne Marie Ruljancich into a seasoned professional. “I’m not in there to get anyone’s attention,” said the demure Ruljancich. “It has always been my goal as a violin player not to show off what I’m doing but to support the music that is happening and I think Jesse’s music needs a lot of space.” Along with her work with the Walkabouts, she has recorded with the Black Cat Orchestra and Maxine.  It is Ruljancich’s violin on semi-hit by The Shins’ “Chutes Too Narrow.”

After this tour, Jesse Sykes and the Sweet Hereafter are going to take the summer off so Jesse can write new songs for their next release.  Writing songs is a strenuous task for Sykes and she gives this advice to fellow struggling songwriters. “Don’t listen to that devil that sits on your left shoulder telling you that you suck,” said Sykes. “If you are really loving what you do, you will never going to know failure because you are just going to keep on doing it.”

Jesse Sykes and the Sweet Hereafter performs on April 5th at Minneapolis’s 400 Bar, April 6th at Cafe Montmarte in Madison and on April 7th at Shubas in Chicago.