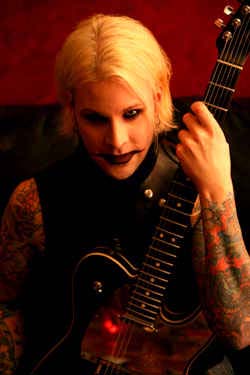 John 5 is a musician’s musician.  Currently on tour with Rob Zombie, John has played with everyone from k.d. lang to Meat Loaf to Marilyn Manson as well as releasing his many instrumental solo albums. He is known for playing country music as he is shredding with metal bands, and is currently up for two nominations at Guitarworld.com.

The band is now touring with Ozzy Osbourne, in support of the new “ Zombie-Live! ” CD.  In the midst of this tour, John took a few minutes to talk with us at Maximum Ink about his vast body of work and what we can expect from him in the future.

MAXIMUM INK:  Your bio on your website said you started as a ghost player.  Is that the same thing as a session musician?
John 5:  Yeah.  Sometimes, if you do certain sessions where you don’t want people to know you’re on the record, or people hire you as a musician but want people to think that it’s the other guy playing guitar. You get paid, but you don’t get the credit.

MAX INK:  Is that weird when you listen to a song and you know it’s you but everyone else thinks it’s some other guy?
J5:  No, it’s not. I didn’t care about that in the beginning as long as I got paid, because I was still struggling, you know?  I didn’t know anything else and I didn’t want to work a regular job, so I was like, ‘Yeah, of course I’ll do it!”

MAX INK:  Your first inspiration was “Hee Haw?”
J5:  Yeah, I have epiphanies in my life.  I remember that “Hee Haw” was a show with country music and skits and all the girls had giant boobs.  I remember this kid, around my age, and he was playing the banjo and he was so good.  I was like, “Oh my god, that’s what I want to do!”  I think, seriously, that is one of the reasons why I play guitar and like big boobs.

MAX INK:  It’s possible.  Do people ever seem surprised that you include country and bluegrass music on your solo albums?
J5:  I think so.  I was like, “You know what?  If I’m going to get recognized at all, I have to do something different and what’s the complete opposite of heavy rock music?”  You would think classical but I was like “I’m going to do country.”  I think that’s what really made the records work.  It was something that no one had done before and I don’t usually have great ideas like that, but I guess that was the one.

MAX INK: It would seem you were on to something there.  How did you get involved with Rob Zombie?
J5:  Dave Navarro called me and said, “Hey, we’re doing this Tsunami benefit in L.A. with all these artists.”  I said, “Ok, I’ll do it but I want to play with Rob Zombie,” because I was always a Rob Zombie fan. We got up there together and just went crazy!  I said, “Hey, if you ever need a guitar player, just look me up!  I know your songs already!” He said he was going to do Ozzfest for eight weeks, in 2005, and after eight weeks it would be over.  I was into it and it has turned into almost three years.

MAX INK:  Who is you favorite underrated guitar player?
J5:  I really like Buckethead and the reason why is he’s made over 100 records, he’s never revealed his face and his shows are great.  His playing is great too and I just love what he does.  Right now I’m on a Buckethead kick.

MAX INK:  How difficult is it to go back and forth between all these genres of music?
J5: I’m tour right now, but I like to break it up and play different things. I’ll play a different style of music and it’s refreshing.  It keeps it fresh and exciting for me.

MAX INK: There are big gaps usually between Rob’s albums, considering he’s doing films and things.  Does that ever worry or concern you, or do you just take advantage of that to work on your own thing?
J5:  Well, that’s a really good question!  How I look at it is he’s going to do films which take a lot of time and when he’s doing that, his head is very in those movies.  So, when he’s doing that, I usually do my instrumental records and I write songs for other artists.  It works out really well.

MAX INK:  The website says you have a DVD coming out in January of 2008.  Is that an instructional DVD?
J5:  Yeah, it’s an instructional DVD.  Those are probably the most sterile, boring things but I love them.  I made this DVD and there’s nudity and crazy stuff going on in it.  Of course, there’s tons of guitar playing, so it’s like the first R-rated guitar instructional video.

MAX INK:  Is there anybody that you haven’t worked with that you would like to?
J5:  I’d say probably Prince.

MAX INK:  Do you and Rob have any plans to release one of the Zombie tour?
J5:  Yes, we are going to be doing that.  It’s probably going to be released spring time of next year.