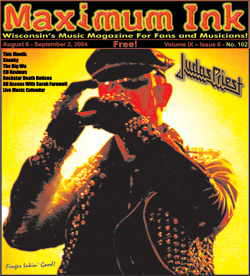 In 1969, while hippies pranced about the farm fields of Woodstock, New York with flowers in their hair, Birmingham, England was giving birth to a monstrous new musical genre that came to be known as heavy metal. A group called Black Sabbath released its first album that year, and while others both in the United States and England were flirting with the heavier side of rock ‘n’ roll, it was that band that nailed metal squarely between the eyes.

Five years later, Birmingham’s fertile musical loins produced another heavy metal monster, one that came to rise just as high as the first, and perhaps, at times, was even more nimble. The vocals soared over others, the songs galloped faster, and two lead guitarists were used rather than one. That band was Judas Priest.

Amazingly, both Birmingham groups have reformed after varying hiatuses and are touring together this summer with Ozzfest, still playing the aggressive, distortion-heavy songs they wrote decades ago in front of fanatical, sellout crowds around the world. Recently, Rob Halford, the outspoken lead singer of Judas Priest, was kind enough to talk with Maximum Ink about his recently reunited band as well as the resulting tour and musical releases.

It was Halford that left the other core members of Judas Priest (K.K. Downing, Glenn Tipton, and Ian Hill) in the mid-nineties to explore alternative musical venues. He joined a “nu metal” outfit called Fight. Then he moved on to form Two, a project with techno overtones produced by Nine Inch Nails mastermind Trent Reznor. Finally, he put together Halford, a group that was decidedly close to his Judas Priest roots (and, it’s worth noting, begat Damage Plan singer Pat Lachman, who switched from guitar in Halford to vocals for his new band). The group even recorded an unreleased ‘Priest song that now appears on the group’s new box set, “Metalogy.”

“I did, coincidentally, record “Heart of a Lion,” with the Halford band as an extra track on the live album,” he explains. “The track was left over from the “Turbo Lover,” sessions. When previously unreleased material was sought for the “Metalogy,” box set, the demo version was rediscovered, so to speak.”

Eventually, while Rob Halford worked with other bands, Judas Priest found a new singer in Tim “Ripper” Owens, an American with amazing vocal abilities and strong stage presence. Owens filled the vacancy in ‘Priest well. Yet, the fans wanted the original lineup as they always do and 2004 finally seemed like the right time for the original lineup to reunite.

“We were over at my place in England to talk about the box set,” says Halford. “At the end of the meeting, the question came up about the reunification of the band. In typical British fashion, things like this are very underplayed. We all sort of said to one another, ‘If you’re up for it, I’m up for it,’ and the decision was made.”

As for Ripper Owens, Halford has expressed respect and support for the singer, but he has no qualms about reclaiming his job. When asked if there will be any guest appearances by Owens during the tour, Halford says simply, “Absolutely not. There’s no need for it.”

The box set that brought the Judas Priest members together is the recently released “Metalogy,” which contains 4 CD’s of the best songs from the band’s entire catalog and a DVD of a live show shot in 1982. While the 64 tracks of music are amazing in themselves, it’s the DVD performance, originally broadcast on MTV, that is the ace in the hole. Halford agrees. “Everybody had been asking about that Memphis show for so long. We had to do a bit of finagling with machines and computers because the original tapes were very brittle, [but] we were able to save the performance.”

Of course, there’s nothing like a live show, and Judas Priest has been on the road throughout the United States this summer, playing gigs on their own and as a part of Ozzfest. In July, the group headlined one night at Rock Fest in Cadott, Wisconsin. The band thoroughly enjoyed the experience. “We were delighted to be invited. It’s not only a great music festival, it’s also tied into the farmers,” Halford says. “All the profits are going to the farmers in the area. Judas Priest is a strong endorser of that. Farmers are a really important part of American history and the American life.”

The group returns to Wisconsin on August 14th as Ozzfest takes over Alpine Valley. “We go way back with Wisconsin. It was one of the first states in America that really took Judas Priest to heart and we’ve never forgotten that. Whenever we come back to that part of the country, it’s always a good feeling, and we always have a good time.” The tour is doubly important to the ‘Priest members because they are co-headlining the main stage with Black Sabbath.

“Its rock ‘n’ roll history really, isn’t it?” comments Halford. “You’re getting the originators, the inventors of heavy metal with Black Sabbath and Judas Priest. Plus, you’ve also got the whole heavy metal tree represented - Slayer, Dimmu Borgir, Superjoint Ritual, Lacuna Coil, Slipknot, and more. We’re all connected through metal. It’s only going to happen once, you know, so I think everybody’s aware that it’s a very special tour, and Alpine Valley will be a very special night.”

The band’s new album, nearly complete, should also prove to be special. Of it, Halford states, “All you can say is that it is a very satisfying and complete moment of writing and recording. We’re not trying to do anything that’s unexpected, we’re just being Judas Priest and writing it like we did for every other record, giving it its own identity and its own legs to stand on.” When pushed for details on the disc, he says simply, “It’ll have all the great repertoire that’s part of the heritage of ‘Priest.”

Judas Priest has not only been influential musically, but has affected fashion in the rock world as well. Arguably, the leather look that has come to define the heavy metal genre started with ‘Priest. “I get dressed to go to work just like a football player puts on his football gear…or anybody else, really. Judas Priest is just in more of an exhibitionist state. Part of the heritage of the group is about the heavy metal look that ‘Priest created.”

Halford’s nickname, The Metal God, comes from the group’s popular song of similar title, and he doesn’t take it lightly. “All my leather clothing weighs close to 30 pounds,” he says. “That’s my workout. I don’t go to the gym, I just go on stage and work out. It’s pretty grueling.” The effort is made not only for the cardiovascular exercise, but because of a true appreciation and love of the fans that Halford and his bandmates have always possessed.

“We wear the leather,” says The Metal God, “because it’s important to the fans. It’s a uniform, and the look is uniting in a sense. The picture is complete. The imagery matches the music.” In the end, this is what all fans want - to be entertained, but also to be reassured that rock ‘n’ roll is alive and well. With Black Sabbath and Judas Priest stomping the terra firma together on the Ozzfest tour, there is no doubt that heavy metal is in top form. And if heavy metal is riding high on the horse, then the saddle of rock ‘n’ roll is well-oiled and firmly strapped in place.