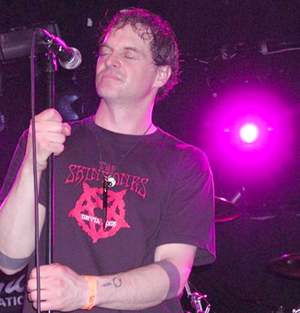 Buddo of Last Crack on stage at the Headway Festival in Amsterdam, The Netherlands
photo by Rökker

The first installment of this story entitled “48 Hours in Iceland with Last Crack” can be viewed on the web at www.maximumink.com/iceland.

I awoke that morning of April the third to stories of snoring, dragons, taxi rides, red lights, girls behind glass doors, Finlanders, The Grand Rokk, Kalli and Jon, the Blue Lagoon, lava, sheep’s head, shark, Black Death and many more than I can list. That sleep allowed us to process that insanity called “48 Hours in Iceland.”

The group is hungry and everyone wants to eat down by the canals and walk around a bit. The Damrak, Amsterdam’s main street, is busy with people of all nationalities buzzing every which way. Cars, taxicabs, trains, bikes, horses, and motorcycles are all out to get me, it seems, as I weave my way through the web once again… only this time, the spiders are asleep.

We end up at a Turkish restaurant in the Red Light District called Grillroom Donny. It’s a small place with a great waiter and everyone gets kabobs and shaorma. The food sets our mood with combinations of spice and relish.

I can’t miss an opportunity for a quick space cake for desert, so it’s back to the Bulldog to check the Internet before heading back to the hotel.

We take the train back to the Hotel Etap and stop at the Heineken machine on the way in to call Freek Kroesbergen, the promoter of the Headway festival (www.headwayfestival.com). He was relieved to hear from us, as bands have gotten lost in Amsterdam before (too many space cakes I guess). He told us to stay put and sent a bus and driver to pick us up.

As we pull up to the site of the festival, Club P60 (www.p60.nl), we can see the bustle of people around the entrance and feel the buzz as music pours out the backstage door to the venue.

Prymary (www.prymary.com), a metal act from California, are onstage as we’re shown to our dressing room. There are three such rooms and ours is the furthest from the stairway leading up to the stage. The bright yellow walls are covered with the logos and signatures of the many bands that have played here. The table is covered with bowls of nuts, chocolate and other delights, and the fridge is filled with drinking water, and you guessed it, Heineken.

I’m sure that the event hadn’t hosted a band from Wisconsin before Last Crack, a puzzled look and “another case of Heineken?” followed every request.

About that time, a huge biker dude came walking through the door. He easily could have been from Wisconsin, but as it turns out, it was Tamme, a long time fan who drove in from a place in the north of Holland called Freezeland. He had an amazing “Harley Davidson” tattoo across his back and many stories to tell.

Before the curtain opens, Buddo says to me, “Coach, you gotta introduce us.” A sudden case of butterflies hits me as I scramble for what to say. The curtain opens and I work the crowd up as Last Crack reclaims the European stage. Their set filled with songs from the first two albums, “Sinister Funkhouse #17” and “Burning Time” is complimented by newer material. Between every song, the crowd screams and pulses as the dirge of photographers do their work in the mote created by a security fence. It’s like the best hometown crowd, the turn out could not have been better.

This was the pinnacle of our trip, the reason we came. Success is sweet, and Heineken is sweeter after a successful show! I was very proud of our crew and hoisted a beer to the ceiling backstage and yelled “SKAL!” as everyone hoisted there’s and repeated my action. The legendary Fates Warning took the stage after us and pounded out a flawless set. The pounding came by way of Dream Theater drummer Mike Portnoy, as this was a one-off concert for him. Bassist Joey Vera, also of Armored Saint and Anthrax, was also a treat to see. Portnoy and Vera, that’s one hell of a rhythm section.

On the morning of Monday, April the fourth we say our farewells to Prymary and the other Headway bands and depart from the Hotel Etap to play and stay at the Winston International (www.winston.nl) on the Warmoestraat in the Red Light District.

We take the free shuttle back to the airport and take a train from there to Central Station, the heart of Amsterdam. Most everyone has rollers on their luggage, but that’s not much help with cobblestone, so the going is slow. When we get to the hotel, our ten-person hostel room isn’t clean yet so we head to the courtyard for a smoky-treat break.

That’s when it hit everyone that we were in the Red Light District; there was an alleyway beside the courtyard with five glass doors. Behind those glass doors were probably the five most beautiful spiders of the web. Ready and willing to entice you to your fifteen-second death in any way you like - for fifty Euros of course. Would our crew stand tough like Ulysses?

Back at the Winston’s club, our bartender, Frazier, shows up to pour us beers as we set up our equipment. It is then that the opening band, The Frying Dutchmen, show up. They are a Hendrix-y, funk-rock-blues act from Japan and have been in Amsterdam for three months.

To our surprise they took the stage and rocked out. The Frying Dutchmen were funny and talented. Buddo couldn’t resist helping them with their English as he spent a year in Japan as an English tutor. Buddosan… Cudasigh!

Last Crack took the stage for their final show of the tour to a more intimate audience. The night was filled with surprises like Henry Vorselman, a fan in the Netherlands, and Greg, an old friend from Madison. The two Icelandic girls that were sitting next to Donny on the plane even came to the show. Again, it felt like a hometown crowd, we were very pleased, not bad for a Monday.

Tuesday morning brought the start of our “vacation” by packing up and again hauling our belongings another six blocks to the Bulldog Café and Hotel .(www.bulldog.nl) The room was very nice and made for ten people. The bar downstairs is a great hangout and internet stations surround the pool table. We spent the night drinking Heinekens with the bartender until late.

Wednesday morning meant a journey to the Swissotel (www.swissotel.com), a swank hotel in the financial district. Our significant others would be happy; we were now staying in the “shopping” district. The Swissotel is on Dam Square and our group gathers for a picture in front of the palace. I decided it was too much to follow the group to museums and what not. This was our last day in town and I hadn’t even picked up any gifts for the family… so Ski and I took off for the shops. I shopped so much that I had to buy a bag with wheels just so I could take it all home.

Wednesday evening concluded with the group hanging out drinking more Heinekens at the famous Grashopper Café, telling stories of our adventure until the early morning hours.

Thursday morning we checked out of the Swissotel and began our final walking journey, all the way down the Damrak to Central Station. It was our longest jaunt, and the heaviest considering the shopping. The guitarists had it the worst with their shipping crates and luggage.

Finally, we board a train to Schipol airport to make our flight back to the US.. Going through the checkpoint, I’m searched in front of two army personnel with machine-guns. Apparently, they thought I had too many AA batteries.

During the three-hour flight back to Iceland, we had a great view of the glaciers of the southeastern part of the island. Ice fields as far as the eye can see, nothing but ice and solid lava, a frozen wasteland.

The layover in Iceland was only a half an hour and it was back in the air to finish our voyage out of the Arctic Circle. Our path took us over the tip of Greenland and back over the Hudson Bay to Minneapolis. Watching the earth turn from frozen to thawed is awesome at the very least. It was good to be home… home is where the heart is. For More color pictures go www.rokkerrecords.com/roadpics