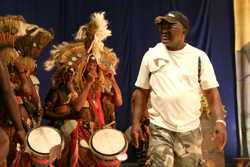 The women sway like churning butter. The rattle and djembe pick up the rhythm and they begin to thrust their arms back and forth, as if repelling the air. They are the essence of life, gyrating and stomping, with beads of sweat pouring down their strong visages. A man with long braids plays the kenkeni to the beat of a throbbing heart. For Les Ballets Africains, music is a celebration.

“Work, justice, and solidarity” are words which represent the legacy of the Guinean people. Through touring around the world, Les Ballets Africains upholds the meaning of these words by sharing the beauty and depth of Guinean history through performance.

Located on the west coast of Africa, Guinea is divided into four regions. The Highlands, the Coastal Region, the Forest Region, and the Foutah Djellon are as diverse in scenery as they are in culture. In an effort to help nationalize their country, Les Ballets Africains unites the different regions of Guinea through performances that dig deep into the core of traditional African folklore, so that the stories can be appreciated by each culture.

The Artistic Director, Hamidou Bangoura, is the vision behind the concept of Les Ballets Africains’ current production, “Mandinka Memories.” The performance is set in the 13th Century, following the journey of a paralyzed man, Soundiata Keita, who overcomes his debilitation and conquers the evil dictator King Kante. The plot delineates the decline of one empire that is replaced by the rise of a new, prosperous one.

The theme of change and transformation is receptive to the difficult conditions present in Africa; where a proud people struggle to rise above oppressive governments and culture-clashing societies. Bangoura states, “It is important for every country to have heroes, to build a sense of national pride. The concept of heroism is imminent for the people of Guinea, because Guinea needs heroes to restore the unity and pride that has been covered by the unfortunate political and social climates that exist today.”

In “Mandinka Memories,” the cast of 35 Guinean dancers portray the story of Soundiata with dramatic panache laced with comedy. Understanding a story without understanding the language is an experience in and of itself. The dancing is naturally spontaneous, but the drumbeat provides the context of the dances. Throughout the production, the drumbeat signifies the mood. Deep, slow beats represent danger or melancholy, while rapid, vibrant beats exude a feeling of life and joy. In African history, the beating of a drum is a sign of solidarity and is used to bring communities together. The drumbeat connects people in the united rhythm of life, in which young and old, rich and poor, men and women all contribute to society.

According to Bangoura, “It’s important to share our culture with the rest of the world, so that the world understands the people of Guinea. Also, to bring attention to the current situation in Africa.”

He further explains that people cannot rely solely on the media to provide all information on world affairs. “The recent strikes in Guinea were given minimal news coverage, so few people know what problems exist there.” The strikes Bangoura refers to occurred in early 2007, where Guinean trade unions protested the rise in living costs, government corruption, and economic mismanagement. The conflict has resulted in ongoing violence and fear of civil war.

Les Ballets Africains promotes awareness through their music. After five decades worth of touring, Les Ballets Africains has proven that perhaps the television screen simply does not evoke the same emotions in people as watching these vivacious traditions be performed the way they were meant to be: Live.

So listen to the beat of the drum. Les Ballets Africains want the continuous rap-a-pap of the doundoun to reverberate in your ears. They want your arm hairs to stand up when the flute plays its nostalgic melodies. And when the chorus of “Niama, Niama” fills the theater, they want you to forget about understanding the words. Instead, understand that the fire in their glistening eyes is neither anger, regret, nor grief. It is pride.