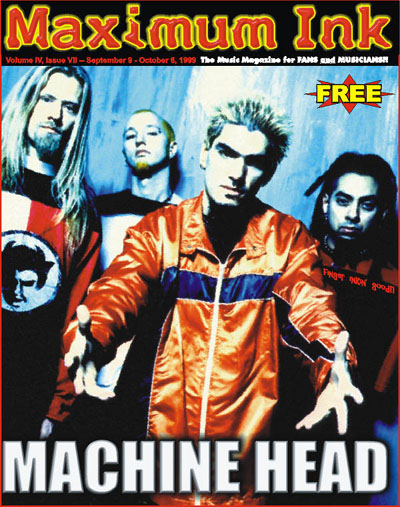 Machine Head on the cover of Maximum Ink in September 1999

With their debut of Burn My Eyes, MACHINE HEAD has transcended the masses with a bludgeoning sound so consuming; so biting; so immensely pit worthy that listeners have been known to trash bedrooms, obliterate venues, stomp, kick, scream,  and sucka punch their friends. With a knee to the cranium, fist to the grill,  overheated speakers, angry mothers, MACHINE HEAD have reaped mayhem in only the most admirable ways from their very inception . The More Things Change saw the band in a more mature light: Still chock fulla aggression yet more refined and appealing to their less militant fans. 1999 sees the band offering up their most mature release yet. Coming this month on Roadrunner Records, The Burning Red is essentially a collection of the band’s most potent qualities; Heavy, emotional, gripping bombastic.

Ahrue Luster,  who replaces guitarist Logan Madder, is a more than natural progression. In fact, there’s something refreshing about the addition of Luster both in his sound and his overall personality. No attitudes, no image and no gimmicks. Just straight up MACHINE HEAD. Maximum Ink caught up with Ahrue Luster and spoke with him about the past and future .

Maximum Ink: When did you decide to leave MAN MADE GOD?

Ahrue Luster: I was in MAN MADE GOD as well as some other bands but no one has really ever heard of them. I was always trying to find the right band and MACHINE HEAD was just the best place for me. I’ve known Rob for over 11 years. I’ve known them far longer than Logan and used to see them when they were still with the original drummer, Tony Castanza. I used to drop him off and pick him up from practice. I was at the very first house party they played at. I guess I always knew that if anything happened to Logan then maybe. I’m a very loyal person so leaving MAN MADE GOD was hard for me. But then I realized I wasn’t as happy as I thought I was. I spent an hour on the phone with Rob when he phoned to see if I wanted to try out. Afterwards I could tell there was just a different vibe. I knew MACHINE HEAD was where I should be, when all four of us finally jammed, it took me about 20 seconds to know I made the right move. They (MMG) were pissed at first but everything is okay now.

MI: Your playing is featured on The Burning Red LP. How did that studio session differ from that of the studio sessions with MAN MADE GOD?

AL: MAN MADE GOD used to argue constantly. There was always sort of a stressed vibe. But we recorded The Burning Red at Indigo Ranch and it’s literally in the middle of nowhere. It’s like a commune or something. Most of my guitar tracks were done in the morning when I was still in my slippers and Ross Robinson (producer) brought amazing things out of all of us. he’s a cross between a mother and a psychologist.

MI: How does your guitar playing in MACHINE HEAD differ from your playing in your previous bands?

AL: MACHINE HEAD guitar tracks are a lot more difficult to play then MAN MADE GOD. They are two totally different sounds. Plus the chemistry among members is totally different and that plays a huge role in the playing. MACHINE HEAD is more relaxed, making it a pleasure to play. It took awhile for me to sort of intertwine with the band but now we’re one unit on a totally creative level.

MI: What do you think will make The Burning Red stand out from other metal LP’s released in the next few months?

AL: We put all the emotion we possibly had into this record. Ross has this system called “The Goose Bump Maker”. He would have Rob explain the song in full. The total meaning of the lyrics. Most bands don’t do that. One member will write a song and the rest of the guys will make the music and they just slap it all together but how do you put emotion to something if you don’t even know what it means?  By doing that we just poured our hearts and souls into it just sort of vibing off what we felt the song meant to each of us personally. It gives each song a lot more character.

MI: So who’s idea was it to cover the Police song “Message in a Bottle”?

AL: I’m the big POLICE fan because in that particular song, I just love where your fingers go on the guitar. I warm up with it all the time. I played it so much that Rob actually started accidentally playing it when he was doing some guitar stuff. Ross heard it and flipped. We ended up recording it like 2 hours after that. We didn’t learn it note for note. We just sort of got he gist of it, took the chords and said, “we have these chords. how will we play it?”

MI: Do you think you would ever play it live?

AL: I don’t know. Maybe as a spontaneous thing.

MI: Filling Logan Madder’s shoes is a pretty difficult thing to do. Did you have to take some sort of crash course in MACHINE HEAD tab readings to join the band with Logan splitting so suddenly?

AL: I was familiar with all of the MACHINE HEAD songs but I didn’t know them note for note. When we played our first show, I had to learn like 27 songs in a month! I was taking like memory pills and everything (laughing).

MI: That was that surprise show when you played under the TEN TON HAMMER alias?

AL: Yeah. I screwed up a lot but it was sort of just a fun thing to do and everyone had a great time. We had all been drinking so much that it was just a cool thing to do to surprise some fans.

MI: Have you received any slack from any die hard Logan fans since you joined the band?

AL: I haven’t received any negative criticism yet.

MI: What sets MACHINE HEAD apart from other bands?

AL: We’re always on 11. Anything we do we do to the extreme. It’s more than real. It’s completely from the heart. It’s us in our purest form.