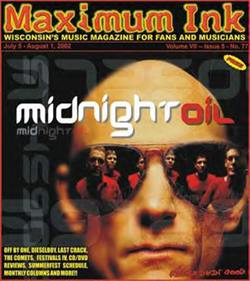 Midnight Oil on the cover of Maximum Ink in July 2002

Midnight Oil has been playing their own kind of music for twenty-seven years now with only two changes in personnel. They actually started in 1971 as The Farm. That says a lot when you think about it and think is what Midnight Oil does. Throughout their thirteen releases Midnight Oil has never let up on their causes of social awareness, inequalities and environmental justice. They have also never let up on their hard rocking and sing-along passionate music.

Fronted by the seven foot tall, shaven head singer, Peter Garrett, Midnight Oil is loud and energetic in their live performances. They have been known to play guerrilla shows on flatbed trucks, once even in front of Exxon’s New York City headquarters, midday during the week. Garrett, who has a law degree, ran for the Australian Senate on a Nuclear Disarmament ticket, losing by only a small margin. The defeat only strengthened his objective of speaking out on political matters as his conscience saw fit. You can’t really argue with a seven-foot tall bald man, can you?

Selling millions of records all over the world, Midnight Oil broke onto the American scene with 1987’s “Diesel and Dust,” a monumental album with unforgettable songs like “Beds Are Burning,” “Sell My Soul,” “Sometimes” and “Put Down That Weapon.” The follow up, 1990’s “Blue Sky Mining” was just as great with the anti-war song “Forgotten Years” and “Shakers and Movers” being as good as anything recorded in that decade.

Midnight Oil’s new CD is “Capricornia” and they are touring the world in support of it. I interviewed Peter Garrett, via e-mail as he was at his home in Sydney Australia.

Maximum Ink: What kind of childhood did you have? Were you a city boy or a country boy? Were your parents politically aware?
Peter Garrett: Happy childhood in suburban Sydney- bush and creeks in the backyard as we lived on the edge of the city, played cricket in the street, kicked a footy around the local oval. My mother was politically active to an extent, on the liberal (in US terms) side, but neither politics or music were dominant influences in our home.

Max Ink: What bands influenced you to become a musician?
Garrett: Local surf bands, bands I heard on the radio and then others I saw at University when I first went there. Skyhooks, Split Enz, I saw Muddy Waters play in a circus tent in the 70’s and fell in greater love with the blues. Add the Bee Gee’s and the Saints (the world’s first genuine punk band) and there was plenty to stimulate.

Max Ink: How and when did you become politically aware? What was the point where you thought, this is wrong, a lot of things are wrong and I want to do something about it?
Garrett: A gradual process of moving the eye from the navel to the horizon. Surfing in sewage in Sydney, seeing our fantastic ancient forests get fed into the woodchipper all contributed.

Max Ink: You have a law degree, have you ever practiced?
Garrett: I practice living most days, the law degree gets used occasionally to read the fine print and Midnight Oil makes me soar.

Max Ink:You ran for Australian Senate and narrowly lost; what was that experience like? Do you plan on formally entering Aussie Politics in the future?
Garrett: I saw the best and worst of people, including myself, fun, challenging, tiring and a good experience. Politics as practiced is a debased form of democracy but any democracy is better than none so long as we stay in the ring.

Max Ink: What do you feel is the biggest concern facing Humankind at this time?
Garrett: Unplugging our selfish hearts.

Max Ink: Is there anything that regular people can do to stop corporations from destroying the earth? Everywhere you look there is some company that is exploiting and destroying local ecosystems, when they destroy enough of them and there goes the entire planet. Do you believe (like Kurt Vonnegut) that humans are a suicidal species or do you believe that there is hope?
Garrett: No I do not believe that humans are a suicidal species at all-its just that our mistakes can hurt. We are many and capable of inspiring things-poetry, beauty, worship, space ships, hospitals-we just need to mature a little and demand an equal say in the whys and wherefores of the current carve up of the worlds earth and sun and moon beams. Corporations will require robust national and international legal instruments to regulate their behavior. There is a heap of work, boycotts, actions, education, and local initiates etc to do.

Max Ink: If there is hope for humans, what is it?
Garrett: A newborn child, God’s grace and a decent piece of music, those that have done good things before us, hope’s perpetuation where you find and cherish it.

Max Ink: What do you believe is the best invention that humans have come up with? What is the worst?
Garrett: Best invention-the wheel, hello hot water, it speaks for itself. Worst - nuclear power. It’s too toxic for a healthy planet.