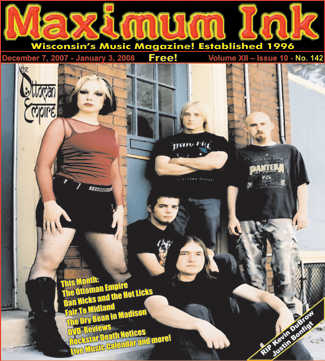 From stoner and death to doom and speed, heavy metal has more subgenres than almost any other music form. It is this constant evolution and steady underground scene that have kept it alive and thrashing even when its commercial fortunes on the mainstream charts wax and wane. The Wisconsin music scene has had a fine tradition of talented speed and progressive metal from Realm and Mas Optica in the late 80’s and early 90’s to Kopecky and Dimension X more recently. Carrying the torch for the modern scene since 2001 and hailing from Madison, The Ottoman Empire is mixing old school thrash (face-melting shredding and constant double bass drum pounding) with the more contemporary hardcore and death sound (big growl vocals mixed in with operatic female singing) to create a unique and powerful sound.

The lineup solidified in 2005 behind classically trained lead screamer, Mary Zimmer, and combining influences like All That Remains, Lamb of God, and Children of Bodom.  According to her, once she heard metal, “it was an instant love affair. I love the power! Metal people are the friendliest, most respectful, people. Probably because they get their aggression out through the music.” As far as the historical band name goes, it “sounded old-school and cool, it doesn’t have any other meaning, political or otherwise.” After releasing their debut album in 2006, Way of the Blade, things started taking off for the band. They signed with a midwest management company and even released their first video for “Anemic World”. A visual mix of Matrix-y slow motion, hair flailing from headbanging guitarists, and close-ups of Zimmer, it’s a classic metal video, from the full moon to black outfits to the flames in the background. Returning from New York City at the end of November, for reasons that Zimmer, “cannot disclose right now” (industry-speak for something big on the horizon but can’t discussed until the names are all on the dotted line), they’re starting to draw attention outside of the region.

So, for Wisconsin metal fans, this might be your best chance to see them in an intimate setting before they blow up. They’ll be at the Annex in Madison on December 29th and according to Mary, “you’re gonna get your money’s worth out of the experience. The live show is the best part, it comes across so much fun with so much energy, and who doesn’t wanna come to a metal show and let loose for awhile?”