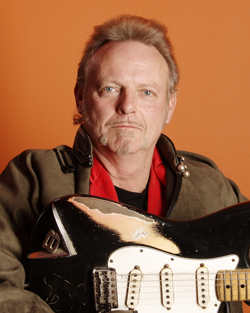 For Paul Filipowicz, the blues is a living breathing organism that is different every time it’s played. Even if the song is old and the chord structure familiar the blues feed into the energy of each musician, the audience, even the room collaborates to reinvent and instill what makes the blues so special.

Filipowicz always recorded with minimal fuss to recreate a live feel but his sixth disc is his first truly live endeavor, although Paul is quick to point out he has been around long enough to have recorded live shows for WIBA when it was considered an underground radio station. In fact, Paul has been on the scene since 1974 as either sideman or lead but has achieved something special with bassist Ray Wright and drummer Brian Howard in, “Chicken Wire.” Recorded in Deerfield’s Cuda Café, a revamped tobacco warehouse with a hard line recording set-up and room for a hundred or so fans, “Chicken Wire,” is a gut-busting wildfire of an album. Twelve originals, a Jimmy Dawkins cover and a finale that features Calvin Owens’ Houston Horns, the disc plays to the crowd, creating a funky momentum that is supernatural.  The secret to capturing lightning in a bottle is the difference between playing and performing and juiced by the crowd, Paul and friends dig deep to make, “Chicken Wire,” sweaty good fun.

Describing his style as West side Chicago guitar with a little Texas sugar on top, Filipowicz admits to be an acolyte of Magic Sam - right down to his physical holding of the guitar. Paul and Magic’s stinging finger picking style combined with deep steam engine chords brings a robust primal vibe that is raw yet spiritual. Although he started on harp as a kid it was when Paul first heard Muddy Waters on the radio that he knew electric blues guitar was his life’s calling. He has heard all the legends, from Howlin’ Wolf to Willie Dixon, Albert Collins, T Bone Walker and Freddie King and Paul admits to liking just about anyone who plays electric guitar. A multiple Madison Area Musician Awards winner, Filipowicz has gigged with his fair share of stars and being part of the Madison blues scene for decades naturally was friends with Luther Allison. As many bluesman, the blues are Paul’s life and it has taken him many interesting places.

A truly American music that has spread all over the world, Paul’s best example of the blues’ universal nature came a few years back when he was asked to play Mongolia. Despite the pick-up band being Mongolian that spoke little to no English, Filipowicz discovered these guys knew their stuff and could really groove. Even half way around the world the blues finds kindred spirits.

Thankfully Wisconsinites do not have to go so far to experience some of that Filipowicz magic. February is a particularly good time to catch Paul in state before he heads on tour in Florida.

Check out the latest news and tour schedule on [Paulfilipowicz.com].