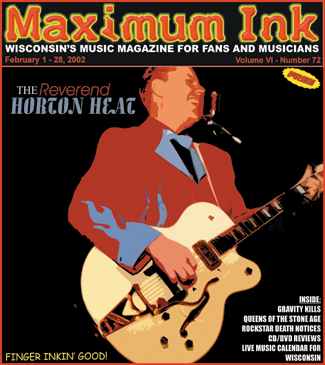 He genuinely enjoys music - writing it, performing it, and recording it. He is steadfastly loyal to and respectful of his fans. But Jim Heath - better known as the Reverend Horton Heat - has some real issues with the two dominant forces in contemporary music: technology and corporate control. In a recent telephone interview from his home in Dallas, he discussed how these elements have alienated him from the mainstream - for better and for worse.

“Since we did our first record, the Internet and web sites have become more important,” Heath said. “But I’m confused about the Internet. I think the way it’s looking, the music will eventually just be free, and that’s not an easy pill for the industry to swallow,” he said. “For us, we don’t rely a lot on the recordings - we get our revenue off tickets and merchandise. I’m so far from the industry, I don’t have the slightest idea of what will happen. But these bands could stand to lose millions.”

An explosion of computer technology in the studio also has Heath riled up. “Since the 1970s and 80s, we’ve been moving into a world where it’s not the sound of the live band,” he lamented. “You put down the drum tracks, then throw in other loops - it takes fuckin’ forever for an album. It’s defining how music is being written and composed. And all they’re doing is turning knobs, while kick-ass players - people with real talent - are passé. It’s those posing knob-turners who are being marketed.” Brace yourself, folks - he points to one of the iconic rock acts as establishing the trend. “Sit and listen to a Led Zeppelin album - they had three guitar parts and three vocal parts on the records. It was all done with overdubbing. I question the validity of that - when you realize that it can’t be reproduced live. Technology has taken music to a weird place - way out there.”

Heath also finds plenty of villains in other segments of the music industry - notably, the mega-labels. The current wave of pablum pop is part of a long anti-rock tradition, he said. “Listen to Jerry Lee Lewis banging eighth notes on the piano - and then lighting it on fire. That kind of rock was done for about two years - and then it was squelched,” Heath observed. “It re-emerged with the Beatles and Stones, and a bit later with Hendrix, but then got killed by bands like the Mamas and Papas . The big record companies didn’t want to deal with that wildness. Some things still shoot through - like AC/DC’s ‘Whole Lotta Rosie’ and Billy Idol’s ‘Rebel Yell,’ but for the most part it’s bands like Poison and Motley Crue doing cheesy-ass ballads. That is NOT rock.”

Hand-in-hand with the labels in this dumbing-down are radio executives, Heath declares. “Listen to the radio - everything on it has a funk beat,” he said. “I can hear the record guys ask, ‘how can we make it work on radio?’ So now all we have is funk - no swing, no shuffle, no rock beats.”  And the corporate consolidation of radio further limits choices. “Clear Channel and their pansies have everything corporatized into what I call ‘Panzoid Rock,’” Heath said. Critics are also not spared from Heath ‘s wrath. “They only can decide what’s wrong with music. It’s easy to print what’s wrong,” he said. “But as an artist, it’s my job to look at what’s right.”

Heath ‘s rebellious crusade for improving music works on two levels. At one level, he focuses on developing as a musician. “I work on all sorts of stuff to get better as a player - from ragtime to Nashville studio licks,” he said. “It helps shore up my chops.” In the studio, Heath admits his self-contradictory dabbling with overdubbing. “I’m guilty - there are some songs with two guitar parts,” he admits. “But in some ways it challenges me to play the two parts at once in a live show.”

At another level, his rebellion has amassed a loyal battalion of troops - followers equally nauseated by processed, formed, pressed, and cellophane-wrapped recordings. “It gives me reason to hope,” Heath said, “because young people realize that we play and work our own arrangements - not with loops.” And in an ironic twist, the Internet has become one of the key forums for the band’s most ardent followers. The band’s website, www.reverendhortonheat.com, has an extensive forum for fans to post thoughts or questions. And Heath ‘s musings from previous road tours are another way the artist connects with his fans. “I got away from doing it last year - I’ll try to get back to doing it again this year,” he said. “But we ended up doing 220 shows in 2001.”

In the past few years, those tours have become critical to the band’s survival. “It’s been a real uphill struggle - working to make the bills,” Heath said. “We need to tour like crazy.” The group’s financial problems are heightened by the deterioration of relations with Sub Pop, the band’s label for its first three albums. Unfortunately for all parties, it’s entered the ugly stage - as RHH has sued the label. “We allege that they have shorted us money (on recording royalties),” Heath stated. While declining to give specifics, he noted a history of black sheep treatment by the label. “On one hand, they gave us a break - we could have gone with other labels. But we were their second biggest band to Nirvana , and they treated us like stepchildren,” he said. “One time we were in Seattle and looking forward to getting together - then they called at the last minute, and said ‘Love Battery is in town, so we can’t make it.’ Since then, it’s been difficult.”

A major reason for the group’s endurance is the camaraderie amongst Heath and his band mates, drummer Scott Churilla and bassist Jimbo Wallace. The bond is especially tight between Wallace and Heath; “Jimbo Song” on the Space Heater album has become one of the band’s signature songs. “And on the new album, I deliver a sermon: ‘You Have A Friend In Jimbo,’ Heath said. “We definitely have a brotherhood going on.” The new album, Lucky Seven, takes them to the Artemis label. “I’m real grateful for all they’ve done for me - they’ve even hired some of my favorite people from other labels.” Heath notes that the album returns to the group’s more identifiable Gretsch-driven distortion. “It’s a lot heavier than our last album,” he said. And it almost became a thematic album, driven by the group’s respect for vintage American vehicles. “The thing about us is that we’re all into old cars - American car guys in a world of Nissans and Hondas,” he said. “I was thinking of making it an all-car-songs album, but I had other songs that were better than some of the weaker car songs - I kept the best in.”

Heath laments that his touring keeps him from his two vehicular projects. “I’ve got a shoebox ‘50 Ford in the garage - I’ll try to get it running between tours.” The other set of wheels seems, well, SO appropriate. “It’s a ‘32 Ford coupe, with a small block Chevy, and a Ford 9” rear - I’ve been putting my money into it,” he said. “The one reason it survived as a body was that it was set up as a booze runner - it had an extra tank, a passage between the interior and the trunk for bottles, and a lot of extra metal welded into it.” And like the band, it’s a long-term project. “It’s been at the shop for five or six years now. Maybe this year I’ll get it done.”

RHH will be appearing at Madison’s Orpheum Theater on State St. on Saturday, February 23rd with Nashville Pussy and Split Lip Rayfield.