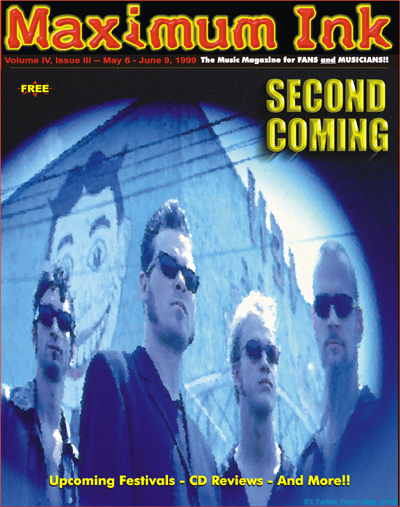 Few will argue the fact that rock music has fallen on bad times. Sure, the music’s out there, but by the time you’ve sorted through the bands whose pants are the only thing drooping lower than their guitar tunings, and ruled out the carefree world of men wearing mascara and lipliner, whose got the energy to look for it? For most, it’s just easier to stick to the classics, relying on Led Zeppelin for all-out rock virtuosity, counting on The Doors for a mature spin on the outlandish element, and looking to Jimi Hendrix for a guitar solo worth writing home about.

From the throbbing rock of the band’s classically-tinted sound, it’s obvious that they share that sentiment. And have targeted their efforts on doing something to fill that void. Clocking in at over seven minutes in length, “Confessional” might not be the most commercially viable cut on their self-titled, Capitol Records debut, but it’s definitely the most telling. The most telling of their sound, style, roots and direction.

“Grunge is fuckin’ dead,” guitarist Dudley Taft responds flatly when asked how Second Coming avoided the trappings of so many of Seattle’s biggest success stories. “It may be dead,” agrees frontman Travis Bracht, “but it was an historic avenue of rock ‘n’ roll. It was a whole other scene, and there are trends everywhere.” The key for Second Coming-Taft, Bracht, bassist Johnny Bacolas and drummer James Bergstrom-is steering clear of trends and navigating a divergent path from today’s corporate music environment. A path where the integrity of the songs is the focus, image and commercialism are not a concern, and bands are judged by the lasting impact of their music. Second Coming is a swaggering epic that obliterates the lines between their hometown’s trademarked grunge sound, and the classic rock backgrounds that make them one of hard rock’s brightest prospects.

They channel their energy from “Confessional” into the barbed explosiveness of “Soft,” mellowing to a murmur for the supple strains of “Vintage Eyes,” and blasting into the beyond on the hyperactive “Electric Head.” They dive to a symphonic depth with “The Song,” trample through the darkness on “Tonight (The Goodnight King)” and stir a raucous rumble through “Free.” When all is said and done, the 11-cut debut boldly and intelligently surges them ahead of their musical peers.

Take “Travisty,” a bittersweet emotional revelation from the singer (the title is a play on Bracht’s name) that opens his heart and mind like a window to the soul. “That song took me six months to write, I tore my legs off trying to make everything count, not wasting any lines,” says the frontman. The results are a riveting ride through the foster care system that raised Bracht through his tumultuous teenage years. “Writing that song was the classic scene of a writer surrounded himself with crumpled papers, throwing everything away and starting over in the middle of a room full of garbage.” But in the end, it was well worth the effort. “It’s the first song I’ve ever written entirely by myself. It was the hardest thing I’ve ever done, but that’s my fucking song. It’s the closest thing to having a child, it means a lot.”

Is there concern that the sentiment may fall on empty ears when exposed to audiences more concerned with having an energetic outlet than hearing songs of somber self-examination? Hardly. “I like taking the scenic route,” Bracht, the band’s lyricist, continues. “If you’ve got to drive from Los Angeles to San Francisco, instead of taking I-5, I’d rather take the 101 and take the scenic route to get there. It’s more fun. Besides, I think people like to be challenged. I write for the people who, when they first buy a CD, open the book to read the lyrics. I write for the people that can appreciate the words as much as the music.”

Tie that lyrical ethic with a like-minded musical mindset, and Second Coming have an arsenal of songs destined to carry them far. “You need to set the mood with the lights and the music. You need to put people in the mood you were in when you wrote the song,” he continues. Hence the audible difference between “The War”-the sequel to “Travisty”-and the techno-charge of “Electric Head.” ”

A lot of the bands that have come and gone in the pop arena have been bands that have been all about a certain sound, not necessarily about the songs,” says Taft. “We’re more about having good songs that will last a long time. Techno stuff may make up 10% of one of our songs, but if that’s something that rock grows out of in a few years, that’s all right with us. We only use it as a flavor for the rest of the music, we don’t depend on it. We don’t want to limit ourselves. If we want to do something straight forward, great. If we want something soft, with an orchestra, great. If we want something heavy and guitar driven, great. We view our music as eclectic and powerful, and we’re a band that won’t limit ourselves.”

“There are a lot of little rules that apply to writing a song for the radio, like ‘Don’t bore us, get to the chorus,’ and ‘Hurry up and get to the second verse,’” continues Taft, a veteran songwriter who’s former band, Sweetwater, received enough acclaim for him to know the hurdles Second Coming has to clear. “I’ve written songs by those rules before, because I got confused and lost sight. With this band there’s a breath of fresh air, I was able to forget all that.” Adds Bergstrom: “That’s the best part about this band, if there’s a real cool riff or a really good groove, none of us are going to try and get out of it. There’s nothing worse than when a band gets into a really cool riff, then cuts it short to rush into the chorus.”

Remarkably, rock fans have a little-known band called FTA to thank for Second Coming. FTA-the acronym for “Funding the Album,” as Bacolas, Bergstrom, Bracht and Taft called themselves-made enough money performing in the Seattle suburbs to record an eight-track debut on their own, pay Kelly Gray (Candlebox) for his role as co-producer with Taft, and fund Second Coming, who played their first show in Seattle proper in July ‘97, after honing their originals as FTA. “We had already been done with our album for two months when we were signed by Capitol, and we were going to do our own distribution, so the deal was like an added bonus,” recalls Bacolas. The band decided to add three songs for the Capitol release, remastered the existing eight, and little more than a year after their first gig as Second Coming, they were on the road supporting their major label debut.

“This has all happened really quickly,” sums Taft. “We wanted to record a short CD to put out ourselves and see what happens, hoping it would get us to the next place. The more things happen, the more we realize maybe these are the songs to make something happen… That’s what everyone around us seems to be thinking.”