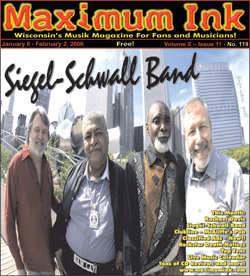 The Siegel-Schwall Band first emerged in 1966 on Vanguard Records in the height of the Summer Of Love blues boomlet. Young Corky & Jim were students of the Chicago Blues and could be found cutting their chops in the Windy City’s clubs with legends like Muddy Waters, Willie Dixon and Hubert Sumlin on an average Thursday evening. Siegel-Schwall released nine studio albums and collaborated with conductor Seiji Ozawa and the San Francisco Symphony Orchestra before parting ways in 1974. Their traditional routine of yearly reunion shows since their 1988 Reunion Concert album on Alligator Records has finally been broken, and the group has released Flash Forward, their first studio record in 32 years featuring all originals, and their most polished effort to date. Maximum Ink spoke with Jim Schwall and drummer Sam Lay about what lies ahead for them.

Originally starting out as a duo for small club gigs, Jim would play guitar, Corky would play piano, harp, and percussion, and they both would sing. A rotating rhythm section was added when bookings for larger gigs became standard. When they were signed to Vanguard Records, Siegel-Schwall released four records: The Siegel-Schwall Band, Say Siegel-Schwall, Shake and Siegel-Schwall 70. The group moved to RCA/Wooden Nickel in 1971 and released Sleepy Hollow, 953 West, Last Summer and the aptly titled R.I.P. before breaking up in 1974. Siegel went on to pursue a solo career intertwined with a fusion of classical music and blues and Jim Schwall earned a PhD in Music.

“In 1988 Alligator records had some interest and they wanted us to do a studio album,” says Schwall. “We kind of had trepidations about doing a record of all new tunes, so we picked the reunion format and asked Sam Lay and Rollo [Radford] if they wanted to do it.”

Rollo Radford had just finished a long stint in Sun-Ra’s Arkestra, and had recorded with Muddy Waters in the ‘70s. His completely off-beat vocals interject with perfect rhythm accompaniment on the bass guitar and are ingeniously creative, accomplishable only by one who had the patience to work with such an abstract jazz musician. “He fits the mold perfectly,” says Jim.

Drummer Sam Lay is a giant amongst men with fifty years in the business and a career spanning stints with Howlin’ Wolf (he was a pallbearer at Wolf’s Funeral) and Bob Dylan (Highway 61 Revisited, and he was onstage with Butterfield when they went electric for the first time at Newport Folk ’64). And even though he is credited with inventing the “shuffle” style of drumming, Flash Forward was his first chance to record his own material.

“We were just shocked to hear that Sam had never recorded any of his own songs,” says Schwall. “It’s amazing, all of the people he has played with over the years, and how much he has to say.”

Lay contributes four originals with his own vocals to the mix, and even plays a hula-girl resonator guitar a la Lightnin’ Hopkins on the last track, “Stormy Weather Love.”

“Alligator is giving us another run,” says Lay. We have this young woman singing with us, Marcy Levy, and man, can she hit those notes. She came into the studio and impressed all of us.”

Corky Siegel is now working and touring with the Chicago Blues Reunion which has just released the CD/DVD set Buried Alive in the Blues, which also features Sam Lay, and has just finished a new album, The Traveling Chamber Blues Show, with his group Chamber Blues.  When not enjoying retirement from his day job, Schwall can be seen playing his solo gig at Wonder’s Pub in Madison, Wisconsin, every Wednesday night. He is also a past Madison mayoral candidate.

The Siegel-Schwall Band will be performing the classics and new originals over a full weekend Jan. 14-15 at The Harmony Bar in Madison.