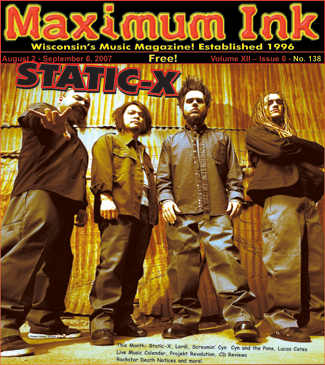 Static-X on the cover of Maximum Ink August 2007

Metal bands are too often misperceived as lackluster carbon-copies of one another screaming about God-knows-what. Spend about thirty seconds with Static-X’s newly released “Cannibal,” and hear those prejudices shatter in your very own ears. Since the 1999 release of their debut album “Wisconsin Death Trip,” Static-X have endured numerous tours in the midst of rotating band members, yet the resilient rockers never fail to blend industrial rock, thrash metal, and even some disco slides into a subversive sound that is potentially sublime. Vertically-coiffed frontman, Wayne Static spoke to Maximum Ink in light of Static-X’s current headlining run on OZZfest, which rolls into Wisconsin on Aug. 12.

MAXIMUM INK: Your fifth studio album, “Cannibal,” dropped in April. That’s quite a feat.
WAYNE STATIC: Yeah, who’d ever thought we would get signed in the first place? We started the band for fun.

MAXINK: Do you think your sound has matured since your last studio album?
STATIC: Absolutely. I think every record is more mature and a step forward. We definitely have more of a grasp of things, and I feel that on every album I get better as a vocalist and better as a songwriter. Conceptually, we haven’t changed much though, other than just pushing in different directions, and lyrically, obviously it’s different here and there. But although we have progressed, we’re still writing music for the same reason, that being to have a good time.

MAXINK: And Koichi [Fukuda], your former guitarist, has just rejoined the band.
STATIC: It’s awesome. It’s been very comfortable having him back, the old chemistry is still there with him. It’s unfortunate all the stuff we had to go through when he wasn’t in the band, but having him back is definitely a blessing.

MAXINK: How was the first time you jammed together again?
STATIC: We invited him to help with programming on our last album. He had left the band in 2000, so it had been about four years since I had last spoken with him. So I just called him out of the blue and said, ‘Dude, why don’t you come down to the studio and work on the record, it’ll be fun.” When he came down, we all got a really good vibe and then our guitar player at the time [Tripp Eisen] got arrested and put away, and Koichi was right there. I think we sound better as a band when we play together; he [Koichi] is a really tight player.

MAXINK: So you’re more or less in the director’s role.
STATIC: Always [laughing]. Yeah, I write all the songs and then everyone sort of fills in their parts and it completes the picture. When I listen to other people’s songs, I sometimes have these moments of inspiration, where I’ll hear a part and just think ‘I want to write something that has that feeling to it.’

MAXINK: What is the dynamic in the studio?
STATIC: Well, I write by myself, I always have. So then I’ll go into the studio and generally come up with a drum beat that I like and that feels straight ahead and groovy, then some guitar riffs to put on there, some basic vocal ideas, and try to put a song together. If I can make a demo out of that, I give it to the guys and Nick Oshiro will tell me if it’s cool, Tony Campos] will lay down some bad-ass bass riffs to go with the drum part, and Koichi will add on some of the guitar solos. Sometimes I hear the song in my head, already done. Other songs, I have the experiment and see what happens in to studio for a few hours.

MAXINK: Do you listen to your own records?
STATIC: No, no, not a lot. I can honestly say I haven’t listened to our old records in many, many years. Once in awhile, when I’m going to make a new record, I’ll listen to the old ones, just to ground myself. Sometimes I imagine the old records differently than how they actually sound, because I’m so used to playing the songs on stage.

MAXINK: Is there a difference musically, as well as in the band chemistry, onstage versus in the studio?
STATIC: There’s really not a lot of difference. Before we go into the studio, everything’s written and we spend a couple weeks rehearsing to the point where we think every song is awesome and every part is awesome and everything is playable and doable. So when it comes to playing the song at the show, we know exactly how it’s going to go.

MAXINK: But, especially with metal, there’s that inexplicable feeling you get from a live show that can’t be reproduced in the studio.
STATIC: Oh yeah, absolutely, that’s why we play metal! It is fun onstage to go and scream your balls off all night, it’s a good time.

MAXINK: How do you physically sustain yourself in a tour? Is it a matter of training your vocal chords to adapt to ‘screaming’ every night?
STATIC: Well you really have to take care of yourself. You have to make sure you get enough sleep, make sure you eat right, stay hydrated. You know, no one is allowed to drink or any of that stuff until after the show to make sure that we give our top performance when we hit the stage. I mean, you gotta take that seriously. If people are paying $25 of hard-earned money to see you onstage, they don’t want to see some drunk guy mumbling [laughing]. In terms of my voice, I’m surprisingly very in control of it. Since we rehearse for weeks before the tour, it gives my voice a chance to get used to the screaming and everything, so I don’t blow my voice on the first show. After that, it’s really just a matter of warm-ups and staying healthy. Once in a while I will get tired though [on tour] and just won’t talk for a whole day [laughing].