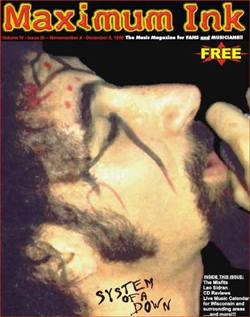 There’s no shortage of bands raising their pitchforks in the name of Lucifer, raping and pillaging in the spirit and disorder of chaos, and redefining battle lines with a flammable spray of piss and gasoline for the entertainment of their audiences. But when it comes time to walk the walk, too many are too busy fumbling over their own absurdity to matter for more than a sweaty night of mosh-pit mayhem. System Of A Down spare us the verbal diatribes, and when it comes time to lead by example, they aren’t satisfied with simply walking the walk. They power the pits, give the masses metal worth mulling over, and provide a rainbow of musical colors in a scene forever dominated by black.

It takes little more than a cursory listen to their self-titled American/Columbia Records debut to realize that there’s more to System Of A Down than your run-of-the-mill metal-thrashing-mad quartet. Building on the artistic foundation of their Armenian heritage with finger-flickin’ guitar licks, crunching bass riffs, and drums that punch, pop and pierce the unflinching darkness of their sound, frontman Serj Tankian snaps lyrics like a mad genius-calculated in their delivery and impact, yet presented in the manic and crazed ilk of a manifesto.

Following a menacing growl with a submissive slur, opening track “Suite-Pee” slams like a Holy War across the desert, kicking up dust and disturbing the religious right with “Lie naked, on the floor, and let the Messiah go all through our souls,” while “Sugar” and “Darts” play like heavy metal takes on the Talking Heads, a schizophrenic toggle between childlike confusion, sheer mental trauma, and dizzying extremes. But there’s depth behind the dementia, as dictated by the harnessed horsepower of “Devil”: “Stupid people do stupid things, smart people outsmart each other,” Serj offers in a song that has more to say than the understated simplicity of the line, “The devil is so lovely.”

The band’s politics come into full view with “War?” boasting, “We will fight the heathens, we will fight the heathens….” with full-on bravado. While the declaration could just as easily be referring to the industry that their musical surge has been released upon, a message of peace rings through the din, clear enough to lay the groundwork for “P.L.U.C.K.” “It’s a revolutionary song, having to do with the Armenian genocide, the injustice,” Tankian says of the album’s closing track, abbreviated from “Politically, Lying, Unholy, Cowardly, Killers.” And it is “P.L.U.C.K.” that best explains the cancelation of the band’s show in Istanbul, Turkey a year ago, where System Of A Down were scheduled to perform with Slayer when the tandem took to the international roads together. “Our boycotting the show was a direct protest of the arrogant denials and disinformation carried out by the Turkish government regarding the Armenian genocide of 1915 against the people of Armenian decent,” the band says in explanation of their decision to pull out of the show. “Turkey is also one of the major offenders human rights as outlined by Amnesty International. Despite all this, they remain a close ally of the United States.”

Despite the stand for international human rights, System Of A Down insist that the core of their music isn’t their heritage. “It’s part of our music, and it’s part of who we are, but how it translates into our music isn’t as direct as some people would like to think,” says Tankian . “When you find a band that’s different from every other band, people are more apt to find a certain denominator. But there may be more to it than that. Because we’re all Armenian, for example, that becomes a pressing issue. But our music includes a lot of different styles that have nothing to do with Armenian music… We’re heavy, and Armenian music isn’t heavy music, it’s more cultural, more tribal. There’s no one word I can use to describe it, but it’s very dramatic and melancholy because of our past. Maybe that mood comes through, but I would say it’s more indirect than direct. Rather than pointing to a single influence, I would say it’s a mixture of a lot of things.”

The whole bombastic boatload of influences have been unleashed on America for almost two years now, including opening stints with Slayer and consecutive runs with OZZfest -on the sidestage in ‘98, and a mainstage draw this past summer, sharing amphitheaters with the likes of Black Sabbath , Rob Zombie and Primus. Following their run with Limp Bizkit on the ‘98 Fest, they’re presently back on the road with the breakthrough superstars, opening at the Dane County Coliseum November 22.

It doesn’t really feel different, it just feels like it’s on a somewhat different level,” the frontman summed. “Whether it’s in front of a hundred people, a thousand, or 20,000, when you look out into the crowd and see the response you’re getting, and all the people responding to you, it’s really all the same. If you have a good show, the energy is just more predominant, the level of energy coming at you is just so much greater.”