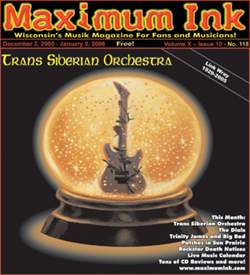 Trans Siberian Orchestra on cover of Maximum Ink in December 2005

It’s the day before Thanksgiving, and while the rest of us are worrying about what time we should start roasting our turkeys, Paul O’Neill has a different set of concerns: The 18 semis and 16 tour busses that are transporting his Trans-Siberian Orchestra spectacles across America.

In seven years, Trans-Siberian Orchestra has not only become the holiday season’s main concert attraction, but also one of the year’s top ticket-sellers. And they accomplish this in less than six weeks on the road, splitting their ensemble into two equally impressive and awe-inspiring bands, each of which is responsible for performing in front of a different half of America in the final weeks of each year. Sound confusing? Try spearheading the whole operation, which O’Neill has done since he conceived the idea that would become the band’s now multi-platinum debut, Christmas Eve And Other Stories, nearly a decade ago.

Yet in the face of it all, he remains as calm and composed as a freshly fallen Christmas snow.

“Life is pretty pain free for me,” he says, having just returned home from the road to spend a day, maybe two, with his family. “Sure, traveling on the holidays can be taxing on me—the only thing I hate more than morning interviews is morning flights—but it’s worth it to see the look in my kid’s eyes. I’ve always been there, for every Thanksgiving, every Christmas…” But come Friday morning, he’ll be back out on the road, criss-crossing the country to spend equal time with both bands, make television appearances (including Good Morning America Dec. 14, and Live With Regis And Kelly Dec. 15), and meet with the powers that be in order to assure that each year continues to build on the success of the past. “The only thing I really worry about is making sure that the tour goes perfect, and having everyone who sees it see a great show.”

To that end, the sky’s the limit for Trans-Siberian Orchestra, and O’Neill is sure to spare no expense when assembling a show that has, through little more than word of mouth, become as much a holiday tradition as any of the yuletide season’s more recognizable icons.

“When we design a TSO tour, I don’t care about the budget—If we build it, people will come,” he says when asked about the cost of the lights, lasers, and indoor snow that will fill arenas for 100 shows in 81 cities, over a span of 40 days. “There’s no greater satisfaction than seeing the looks in people’s faces…

“It’s really important for us to make every single TSO album, and every single TSO tour, like medieval castles: They look really cool from a distance, but the closer you get, the more there is to look at. Then, when you get there, there’s even more to explore. The more you look at, the more there is to see, and that’s exactly what a TSO concert and album are about. The more time you spend with us, we never want you to get bored, so we’re always adding new facets and keeping everything engaging.”

Like the tours of the past several years, this season’s holiday run will open with the Christmas Eve And Other Stories rock opera performed in its entirety, complete with a 15-piece band in each city, as well as a local string section to help perform the epic symphony. The set will then highlight selections from the other albums in TSO’s recently-completed Christmas trilogy, The Christmas Attic (1998) and The Lost Christmas Eve (2004). Also represented will be material from TSO’s first non-Christmas album, Beethoven’s Last Night (2000). Meanwhile, O’Neill is already knee-deep in the material for Night Castle, which should begin recording in 2006.

With a professional resume that began as the guitarist in touring casts of Jesus Christ Superstar and Hair, it was production that best suited the New York City native, who was integral in the success of heavy metal act Savatage, writing and co-writing much of their material. One of those songs was the instrumental “Sarajevo 12-24,” which appeared on the band’s Dead Winter Dead rock opera, and later became the inspiration, and core, of TSO’s debut.

“Dead Winter Dead was written after I saw images of dead women and children in Bosnia, and one, in particular, of a mother holding her child, both with bullet holes in their heads. Her child was about to be killed, there wasn’t a damn thing she could do about it, and she refused to let go. They just lay there, dead, with snow around them—Dead Winter Dead. Everything on that album was based on those true stories…”

Yet, in Paul O’Neill’s magical way, he has spun those stories to be larger than life, and larger than any one of us, spinning an epic so magical it glistens with the spirit of the holiday season, challenging listeners to carry that seasonal joy into the new year, and beyond.

Paul O’Neill has built a castle. And like all great castles, TSO is build to last.