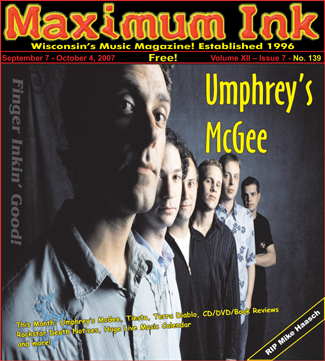 Umphrey's McGee on the cover of Maximum Ink September 2007

When first hearing the voice of Joel Cummins, the keyboard player from Chicago jam-band Umphrey’s McGee, one might expect a stoned-out, hippie wasteoid, not the articulate, self-deprecating and passionate music theory graduate that helped found the group in the mid-‘90s at Notre Dame University. But the man’s musicianship is no joke.

Teetering on the edge of the mainstream with their third album, “Safety in Numbers,” the band released a double album of tracks from the “Safety” recording sessions called “The Bottom Half” last April, performed on Lollapalooza, and started opening for the Dave Matthews Band on his latest tour (to which Cummins half-jokes, “One of the goals was to play more tunes for the ladies.”)

It’s touring that keeps jam bands going (and what kept the Grateful Dead in business for decades), and Cummins probably provides one of the best explanations for the long guitar solos and extended improvisation that can be expected, as they help define the genre. “When we’re in the studio, we want to get as true of a version as we can, with clarity, conciseness, and the essence of what’s happening. But live, we can stretch out songs as springboards for further creativity, and continue an idea that ties into the form of the song itself.

“For all the fans that have seen us 15-20 times, we want to take people where they didn’t expect to go and take chances. We put on the best live show that we can and surround ourselves with great musicians. It’s a little bit of everything, from vocally-oriented songs to laid-back and progressive. We check over set lists to make sure that it’s not the same show. We’re doing the improvisational things that a lot of other bands aren’t doing.”

Like being ridiculously prolific. The band’s next project is a double live album in October, and they’ll follow that up with a new studio record in mid-2008.

As for their Sept. 13 performance at the Orpheum in Madison, a city famous for being jam-band friendly, Cummins says, “We have fans there that have seen us a lot of times. We love it, and have had some of our strongest shows there.”