GREEN BAY PACKERS: 10 years ago I was writing “Go Pack” in this column as Green Bay was on their way to a second straight Superbowl which they painfully lost to Elway and the Broncos that year. 10 years later, the Packers might be in a similar situation as those ‘97 Broncos with a possible Superbowl berth with a young team and experienced quarterback. I’m thinking two more Superbowls (or more, I won’t turn them down) back to back and Favre goes out in a blaze of glory, Elway style. I know, crazy, but you didn’t think they’d win 17 out of the last 20, did ya? [www.packersnews.com]

TEN YEARS AGO IN MAX INK: Arlo Leach was the guest speaker at the Musicians Guid meeting this month ten years ago. Arlo came in with his mac to show local musicians how to use a computer to promote and record bands. He wowed everyone as he was already recording multi-track on his laptop and building dynamic, content related websites. These days, all of that is commonplace and Arlo is again at the forefront of technology, of course, having moved to Chicago some years ago to develop software, web content delivery systems and promote his music. Arlo doesn’t have just one website, but a bunch! Here are three: [www.ArloMedia.com] (computers), [www.Arlotone.com] (music) and [www.Arlorant.com] (politics). I wonder if he still uses this quote from his old ad: “Quality products for musicians with ambition.”

The January 1998 issue also featured interviews with Bongzilla and the Pushbacks and cd reviews included The Other Kids’ “Neverland” album, “Weedstock 1” a compilation that featured Bradley Fish and Bongzilla, the Seventeen Rhinos’ “Planet Indigo”, and the Ex-Action Figures’ 7 inch EP to name a few that are memorable..

MAXIMUM INK NOW: This month features the first in a new series of Crossword Puzzles and Word Searches in Maximum Ink. Many of our readers enjoy Maximum Ink at a local pub or restaurant, so we thought it would be fun to give them something to do.

We’ve also added a table of contents to help you get to just the stories you want quickly… and if that isn’t enough, we’ve added RSS Feed to our website. Go to Maximumink.com and look for the “Subscribe to RSS Feed” text or look for the automated RSS icon that appears in your browser menu. Every time the website is updated, the headline, description and link is posted on the feed. 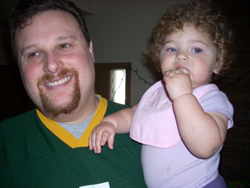 ADVENTURES WITH NIKOLAI: Nikko’s birthday party got snowed out at least three times. But between Packer games, snow and newspaper production we got ‘er done! When all the presents had been opened, one remained. Nikko ripped the wrapping paper from the large box, opened it up only to find another box. Upon the opening of that box, was another box, and then a bag, and then a sealed packaging envelope and then……. The Sony PSP with Darth Vader printed on the casing and a few Star Wars games. He took to it like a boy racing a pod in a Tattoine desert, at one with technology. (Right: Steven and Rachael, Steve Delivers papers in Janesville, now he can say he made the paper)